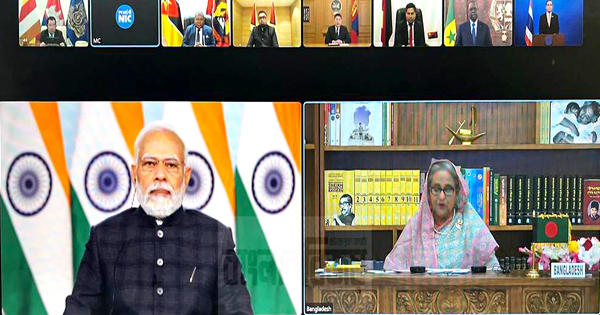 Voice of the Global South
Summit

Desk Report: At the Voice of the Global South Summit hosted virtually by India today morning, Prime Minister of India, Mr. Narendra Modi called on leaders of the Global South to unitedly forge a common agenda for its own development and for the three-fourth of humanity that lives in it.

Bangladesh, represented by H.E. Sheikh Hasina, Hon’ble Prime Minister, was invited to the Inaugural Session where world leaders shared their country’s views. She thanked the Indian government for inviting Bangladesh to this important summit that would provide it a unique opportunity to engage with counterparts world over. PM Hasina warmly congratulated Indian Prime Minister Narendra Modi and the government of India on assumption of G20 Presidency and added that Bangladesh welcomes India’s vision as the President of G20 to ensure inclusive development under the theme, “One Earth, One Family, One Future”.

In his remarks, PM Modi spoke of the Global South as a united entity with the greatest stakes in the future and added that India has always stood for greater role of developing countries in determining our common future. To reshape the global emerging order, he called for an equivalent voice of the Global South. To redesign global political and financial governance, remove inequities, enlarge opportunities, support growth and spread progress and prosperity, he called for simple, scalable and sustainable solutions to transform the Global South and proposed a 4R strategy – ‘Respond, Recognize, Respect and Reform’: Respond to the priorities of the Global South by framing an inclusive and balanced international agenda; Recognize that the principle of ‘Common but Differentiated Responsibilities’ applies to all global challenges; Respect sovereignty of all nations, rule of law and peaceful resolution of differences and disputes; and Reform international institutions, including the United Nations, to make them more relevant.
Human-centric development came out as an-important important priority from all the world leaders.